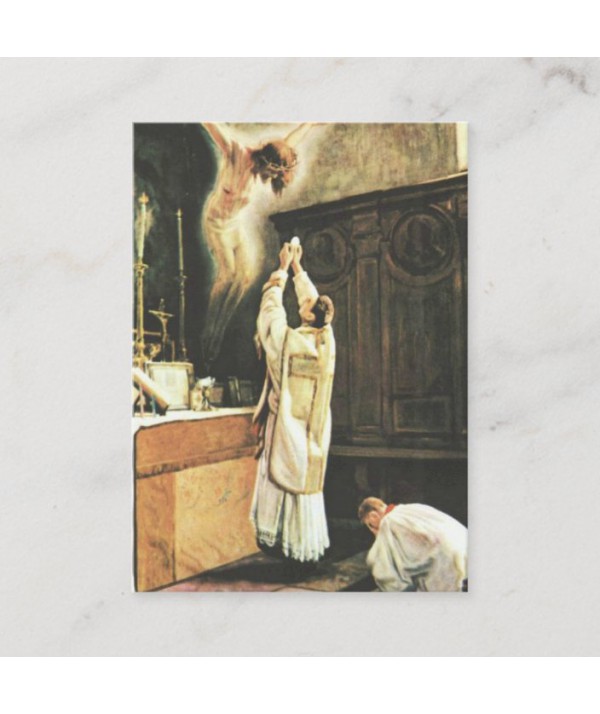 “Without the Sacrament of Holy Orders, we would  not have the Lord. Who put him there in that tabernacle?

Who welcomed your soul at the beginning of your life?

Who feeds your soul and gives it strength for its  journey?

will prepare it to appear before God,  bathing it one last time in the blood of Jesus Christ?

The priest,  always the priest.

And if this soul should happen to die [as a  result of sin], who will raise it up, who will restore its calm and  peace?

Again, the priest… After God, the priest is everything! …  Only in heaven will he fully realize what he is”.

Here are some considerations on the history and nature of the priesthood, and the reasons for the opening of this seminary.  In the great fight between Heaven and earth that began when Eve and Adam fell to the Original Sin, the very first thing that God promised was the priesthood.  He said to the serpent, “I will put enmities between thee and the Woman, and between her seed and thy seed, and she shall crush thy head”, and this seed is the priesthood of Our Lord Jesus Christ.  God made priests from the beginning – Adam was the first priest – but man’s priesthood had been killed by the stain of sin.  All the great priests of the Old Testament such as Moses, Aaron, Melchisedech the high priest, and all the original prophets were both priests and the heads of the people, but these priests were not able to prepare souls for Heaven because they were unable to open the gates of Heaven.  Their priesthood was the preparation for the death of Jesus Christ on the cross, when the true priest would offer the perfect sacrifice and the true priest would die, and then the gates of Heaven would be opened.

When the seed – Our Lord Jesus Christ – entered into the world, the Church Fathers and St. Thomas Aquinas tell us, the whole of the divinity poured itself onto and so hypostatically united itself to the humanity of Christ that He became in His whole nature, in His whole being, priest.  He became the true mediator and the only mediator between God and man.  For three hours on Good Friday Our Lord Jesus Christ worked out our redemption, but He did not become man only to work out our redemption.  He also came to establish His Church and prepare priests who would “go and teach all nations whatsoever I have taught you”.  He said, “behold I am with you all days even unto the consummation of the world”, promising that until the end of the world, God will always have priests in His Church, even if they are few in number, and even if they are sinners.

During His 3-1/2 year public ministry Our Lord Jesus Christ walked with His Apostles, trained His Apostles, taught His Apostles His ways and made His Apostles spend all their time with Him.  The essence of what Our Lord Jesus Christ taught the Apostles was “you follow Me.”  He taught them His doctrine and made them memorize that doctrine.  He spent 3-1/2 years on this public ministry because it takes time to prepare priests.  The Apostles must have questioned why Christ did the things He did, but those Apostles stayed with Him and they wondered.  They stayed with Him and they didn't understand.

Our Lord Jesus Christ formed his priests well, but notice this about these priests that He formed.  For 3-1/2 years they went around with Him, and at the end of the 3-1/2 years, twelve of the twelve abandoned Him.  He formed weak men, not strong ones.  He wanted the Apostles to have power but the power He wanted them to have was the power of Heaven, and if He had formed Apostles that had too much natural power, they would think that their victories and the conversion of souls and the miracles that they would perform would have been of their own power.  The Apostles would think their victories came from themselves and therefore, He chose weak men.  Twelve out of twelve failed, and He knew they would fail.  Eleven out of twelve rose from that failing and that was because of the great teaching of Christ.  Then, they spent time with Our Lady, who healed their wounds.  Then, the Holy Ghost came and filled them with fire and then the cowards went out, never to fear again.  The weak went out never to fail again.  Once the Apostles had experienced the cross, once they had suffered, once they had spent time with Our Lady, after their ordination to the priesthood, then the Paraclete was able to come.  Notice that the Paraclete did not come on Holy Thursday when they were ordained priests.  This is all part of the mystery of that miraculous gift God gave to mankind which is the gift of the priesthood.

We find in our present crisis that there is a decline in the priesthood.  The priests are losing their focus and losing their compass, and they forget that all things are made by God, all things come from God, all things are made for God, all things were made good, and all things were made perfect.  The wicked error of evolution teaches that things were not created good, that things were not created as God made them in perfection, but that they were created through violence and they were created over billions of years by chance, they were created through the survival of the fittest, through selfishness, by the lucky crushing those that are weak.  This is what the devil teaches and it has infected the priests; it has destroyed the divine compass.  These errors, these heresies, enter into the spiritual life.  They enter into the doctrines of the Church, and they make the priests believe in the circumstances of change, that the times have changed.

The devil has infiltrated the Church.  The cause of all evil in the world today, of all the troubles, is sin but now the modern priest is not sure.  He wants to see the other causes of these problems.  He wants to see other solutions.  He wants to be balanced.  The temptation of the modern priest is to base his life on many things.  He will base his life, of course, on Faith but he will also base his life on the opinions of theologians and of modern philosophers, on modern wisdom and the very great advances of modern science, and on the opinions of men.  Only one of the many things he bases his life on is the Faith.  The priests are losing their Faith, losing the recognition that there is no other way to God than the way that God has ordained.  There is no other way to the truth than the way that God has described.

These men of Faith must be priests.  They must be formed in the seminary, and this seminary must be like unto those of the days of old, not of recent times but of ancient times, where they must learn to follow the Christ in all of His strange ways, and learn to stay next to Him in all of the things that He does.  We must do what Archbishop Marcel Lefebvre did.  He had a vision of what must be done to win this battle against Modernism.  His vision was of an independent, international seminary, and it would have to be a seminary only for the good candidates, only for those that wanted the Latin Tridentine Mass.

Archbishop Lefebvre was the Superior General of the Holy Ghost Fathers when, in his wisdom, he saw the great crisis in the Church in 1960’s.  He was the leader of the largest missionary order in the Catholic Church.  He could have formed a special seminary of the Holy Ghost Fathers but he knew that when he was no longer the Superior General, those other thousands of priests, would put pressure on the traditional priests.  He knew that the liberal faction of the Holy Ghost Fathers would far outnumber the conservative and traditional faction, and the liberal faction would infiltrate that new seminary.  They would change out the seminary professors as time progressed.  They would admit modern seminarians who wanted both the new and the Old Mass, and that seminary would preserve the Catholic Faith for only about five or ten years.

What Archbishop Lefebvre knew would happen within the Holy Ghost Fathers we, his sons, are now experiencing in the Society of St. Pius X.  Those priests who are clearly antimodernists, those priests that are clearly against the Modernism in one way or another, they are set aside.  They are mixed in with liberal priests.  They are removed from the essential apostolate.  They are not able to do their work.  Seminarians are slowly weeded out of the seminary.  Those who are too independent-minded, those who seem like they are not going to be silently obedient, blind “yes-men” don't make it through the seminary.

The Society of St. Pius X has changed its teaching, talking too much about the good points and not talking about the bad points of Vatican II.  “Yes”, they say, “we are against the New Mass”, but they are against it in the same way that the Indult communities are against it.  They are no longer essentially against it.  They no longer say that it's intrinsically evil.  They no longer say the whole Council must be thrown out because it is poison through and through.  Instead they say, “95% of it is good but be careful of the other 5%.  We need to know what is part of the 95% and what is part of the 5.  We should have a balanced approach”.

The new leaders of the SSPX have stepped away from its mission and have abandoned its work.  We must continue the work of our holy founder and continue in the path which is necessary for the salvation of souls.  When the time comes, when Our Lady comes to bring the victory, we must be found doing the work of Christ and then she will bless us.  Until then we must continue the work of Christ and ask the grace that there be more and more priests, and more and more young men generous enough to come to the religious life.

There are souls requesting it, generous souls throughout the world asking to enter into this religious life.  We must ask for the grace and help of Our Lady and Our Lord to be able to do this work, and we must be dedicated to it until death.

In the Immaculate Heart of Mary,